MBStop II - Few Clarifications a Month or so Before Release

Jiquor here. This is a small thread to combine some FAQ's and some clarifications before STOP II releases between July 6th, 2018 and August 6th, 2018.

Q: How many versions are there going to be for Marble Blast STOP II?
Answer: There are going to be, for now, four different versions of this modification. Those are:
- STOP Mode (Free Play Mode, essentially.)
- Story Mode (Story Mode; isn't that obvious?)
- Challenge Mode (Uses STOP Mode. Might add STORY MODE too, but that seems unlikely. Also known as Brutal Difficulty.)
- No-Jump Mode (Uses STOP Mode. You can't jump AT ANY TIME. Some levels are removed, changed and altered here.)

Q: Music in this modification. What/Who is making the soundtrack this time?
Answer: The last Marble Blast STOP had horrible music quality, and music in general. That's why, we're using a huge variety, spicing things up a little bit, and I've learned a LOT better about looping and music in general. This also includes looping gifs, creating nice visuals for my Pokemon Pictures, stuff like that. However, that was off topic. Music entails:
- hPerks is making the Marble Blast STOP II Soundtrack. Whatever he doesn't make before release will hopefully (with his permission,) be put into Marble Blast STOP II because his music is just too damn good.
- Markus Schulz, an American-German DJ who created electronic, house and techno music has music featured here. He compiled and wrote the fast-paced, electronic music. You can check out his compilations on iTunes and online.
- Finally, there are other songs in this game. Old flash-game soundtracks for nostalgia and Midway/Cruis'n Soundtracks, for instance.

Q: Can you elaborate a little more on the texturing for Marble Blast STOP II?
Answer: Like the music, a few people have asked me about this. I've become a better texturer thanks to practice, assistance from other builders and learning tips/tricks to good texturing. A lot of the texturing is still the MBG theme, but similar to Marble Blast Platinum, the textures are edited to be "more realistic," and "glossier," instead of "cartoony." I would also like to tell you that there will likely be building errors/texturing errors that I failed to catch upon release. There will be an email and forum where you can submit texture errors to. Please note that negative/non-constructive criticism, simply being rude will have your request ignored. I won't change a level/something for you either to make it "fit your standards better."

Q: How many marbles will be in Marble Blast STOP II?
Answer: There are many, many marbles in this modification. Here's a general idea of what you'll be coming across.
- To purchase with virtual currency in the game that you earn from levels and finding "Skill Points," there are a grand total of 50 marbles available for purchase. There will be more with each update, I'm sure.
- In the future, after STOP II has released there will be another 50 set of marbles that you may not purchase. You may only unlock them by finding them in levels (if the level description says it has one in the level,) or by completing certain tasks in STOP II, such as every single Beginner Level = you get the Triangular Marble, for instance.

Q: Which version of Marble Blast STOP II is coming first?
Answer: Due to some developmental delays, I regret to inform you that (even though there are two trailers for Story Mode,) STOP Mode will be coming first. It might be better in the long run. I'd like to apologize for the delays.

Final Q: Where can I donate on behalf of your project and hard work?
Sorry, but due to agreements and rules, I cannot sell anything to you for STOP II. It will be free of charge. However, if you'd like a shape file commissioned that you'd like to use for anything (including Marble Blast, I can make .dif's, but still learning how to make transparent ones) or if you'd like to donate for my general projects (there will be a Website for my projects, games and photos in the future) you may go there to donate once the site is up. This won't be set up for a while though.

With all that said, here's one of my favorite sneak peeks for STOP II.


More things to come in the future, and there might be a few edits here.
- Jiquor 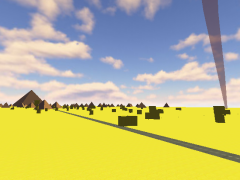 Less More
06 Jun 2018 15:37 #2 by Nockess
Replied by Nockess on topic MBStop II - Few Clarifications a Month or so Before Release

No, actually, that wasn't obvious. My life is saved because you pointed that out.

I've said this many times and I'll say it again. Hard doesn't necessarily mean fun to everyone. Some people can like a challenge, me included from time to time, but scattering them everywhere a little discouraging in my opinion. Better to focus on replayability over difficulty (one of the huge reasons why areas of Marble Blast Platinum is disliked so much).

Jiquor wrote:
Markus Schulz, an American-German DJ who created electronic, house and techno music has music featured here. He compiled and wrote the fast-paced, electronic music. You can check out his compilations on iTunes and online.
- Finally, there are other songs in this game. Old flash-game soundtracks for nostalgia and Midway/Cruis'n Soundtracks, for instance.

I would genuinely be both impressed and shocked if you managed to do this "correctly". I understand (from past conversations over text) that you may not entirely pay attention to this, but you do need permission to use other people's work (songs in this case), despite whether it's free or not and if you credited them. If someone used content from MBStop in their own mod, I'm assuming you wouldn't be happy with that. (If you didn't care and actually granted them permission, that's another story, but focus on the main point of the argument.)

Jiquor wrote:
I've become a better texturer thanks to practice, assistance from other builders and learning tips/tricks to good texturing.

Jiquor wrote:
Please note that negative/non-constructive criticism, simply being rude will have your request ignored.

PLEASE be careful with this. I'm remembering past events of this and you unintentionally taking some people's criticism that was meant to be constructive as "simply being rude". You can also just ask someone else and get their opinion on whether criticism is constructive or negative.

Less More
06 Jun 2018 20:11 #3 by Isoplere
Replied by Isoplere on topic MBStop II - Few Clarifications a Month or so Before Release
Thank you for the feedback, Rosie!

Hopefully I can manage to get hPerks to finish his music.

However, I will point out that using everything with permission cannot 100% exactly be done. Take a look on behalf of YouTube creators. Most creators aren't using permission for other people's songs on their videos.

However if one artist were to complain about a music file in the game that they find and don't want me to use, I'll be happy to take it out/make some sort of deal with them depending on what they feel.