It's been a while since this sub-forum has seen the light of day, and there's a pretty good chance that it'll go back down into the darkness until I decide I'm not too lazy to write another entry.
I have quite a bit to say, actually, and that's what you get when your last post on the sub-forum where you get to talk all about yourself was from 10 months ago. There have been quite a few cool things that I've experienced in the past few months (it's probably fair to say since the beginning of 2018). The best option is to list all of the significant events from least to most recent.

January 20th/May 19th: Eagle Scout!
I've talked about this on the Discord server a little bit when this happened, but it's definitely worth mentioning again because of how much of an accomplishment it is.
I officially turned in the paperwork and was at last awarded my Eagle Scout rank in January, and my ceremony (which was actually a joint-ceremony with 5 other brand-new Eagle Scouts) was a few months later, and you know that this kind of thing is a big deal when family members will fly across the country and stay in your hometown for two days (Florida to Seattle in my grandparents' case) just for the sake of watching their grandchild get an award. It was really cool to see a crowd of at least 150 people sit in "organized" rows with their undivided attention on me as I rambled on about my experience in Scouts.
As much as I complained during the actual several-year-long process of getting Eagle Scout, I can't even begin to describe how much I learned and some of the experiences that you can only do in Scouts. I wish I had actually figured out how cool everything was earlier than I did because I mentally missed out on quite a bit, and I regret that.
One of the really nice thing about getting this achievement at 16 years old is that since the age limit is 18, I still have two years to enjoy some of the activities I still have yet to do, and even earn some more awards. I was smart enough to get a picture of my uniform which shows just about everything I've earned, and I'm quite proud with my efforts. It's certainly something cool to show. 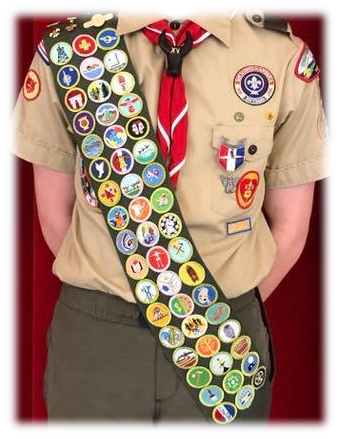 Last of all, starting in 2019, Scouting is making a major change to its system and allowing girls into the experience, which is huge deal. If you get what I'm referring to, you can probably understand how happy I am.

March 29th: I'm Going to College?
There's a program here which we call "Running Start" (it's probably called something outside of Washington) which basically lets students going into their junior and senior years take college-level classes, and in my case, at a genuine college, and it works really well for homeschoolers like me. So this fall, I get to attend a couple classes at one of the local community colleges, and I'm not entirely sure what to expect. This won't be a full-time thing since I would probably be overwhelmed by the school-like environment (since I haven't actually been to a real school in four years), so I'll be taking two classes just to start off with: one of them being a math class, and the other being a programming class. Thankfully, a friend of mine is attending the same math class as I am (at the same time), so I'm glad that I can share some of the "suffering" with her. Hopefully it won't be to bad.
I'll probably have a lot more to say as I actually start going to these classes, so chances are I'll write an entry describing my experience once that time rolls around.

May 29th - June 2nd: Third Annual Road Trip
One of the great things about homeschooling is that it's REALLY easy to bend the schedule which allows my Dad (who teaches me) and I to do some things that we'd normally not be able to do if I was still attending a real school. This is the third straight year that my Dad and I went on a south-western road trip, and needless to say, it didn't disappoint.
The first two years we did this, we focused more on National Parks. In 2016, the two of us built the road trip around Yosemite and Yellowstone, which were both amazing to see. Last year, we only visited one major National Park, The Grand Canyon, but the other really notable thing about that road trip is that we visited 16 National Parks in two weeks. It was quite the rush to some of the parks, but it was totally worth it in the end.

This year, we decided to stay closer to home and stay in Oregon and California (unfortunately nowhere close to Eguy), and since we knew my grandmother (Dad's mother) would enjoy the trip as well, we brought her along.
Our first destination was Redwood National Park, which in a way we spent two different days exploring. We arrived and passed through the park on May 29th, the same day we left home, but we realized that we completely missed the chance to drive through one of the trees. We ended up driving all the way back to the park from the hotel we stayed at the day after and did what we had originally planned.

The destination after that was Oregon Caves, which unfortunately I don't have much to talk about, which isn't a bad thing since it's really cool. It's a just-over-a-mile-long hike underground through a series of passages with several hundred stairs and tunnels with ceilings as low as 45 inches off the ground. It was definitely worth touring despite the temperature, and I certainly recommend touring it yourself if you're nearby.

The final big destination was Oregon Crater, which I had heard many interesting stories of, but it was the first time I ever saw it in person. June was less than a day away at this point, so I was pretty surprised to see that there was still plenty of snow on the ground when I first saw it. I actually have a fantastic panorama of it floating around on social media which I unfortunately couldn't get a proper photo of to share here, but I'll see if I can screw around with it a little bit and post something here.

The two pictures here show our car literally inside a tree and a part of the Oregon Caves tour which was the most impressive part out of everything in my opinion. 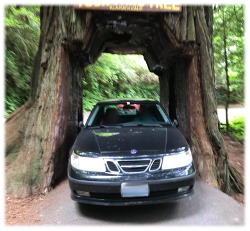 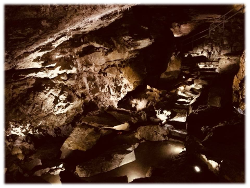 June 24th - July 1st: Long Anticipated Meet-Up
Eguy and I finally saw each other!
I had actually seen him for the first time several days before June 24th when he first came to Seattle for concert purposes, and Jiquor decided to tag along and we all hung out for about an hour and a half talking about Marble Blast and having lunch. Eguy went up to Vancouver for a couple days and then came back down just so we could spend some time together for a little while longer.
The first thing I did for him while he was in town was invite him to spectate one of my karate classes, and although I wasn't teaching at the time, I was testing, so I was pleased that he got to see what that looked like. Fast forward a couple days and it's Saturday the 30th. We actually found some time to do the tournament match that was thankfully scheduled for that week, and we were playing on two different computers that were no more than five feet away from each other. After a very frustrating result on my end, my Dad and I took Eguy and his Dad to a Sounders game which I had wanted to do for such a long time because it's an experience that's really hard to top. Along with that, the game was against arch-rivals Portland, so the atmosphere was immediately more intense. I don't know how many times I told Eguy how lucky he was that the one game he could watch was a Seatle vs Portland game, and he eventually figured out that I wasn't wrong when I said it's an experience you don't want to miss.
Eguy ended up leaving the morning of July 1st, which was a couple days earlier than I expected, but there's a decent chance that I'll fly down to the Gay Bay Area and visit his stomping grounds next spring.

(As much as I'd love to post pictures, I didn't take nearly as many as I should have... or rather any at all.)

July 25th - August 21st: Last Year at Camp Nor'wester
I've talked positively about this camp a number of different times, and my opinion still stands. My parents and I have spent several years finding the perfect summer camp for me, and we found this camp on something like the sixth (and final) try through a friend of mine who still goes to the school I went to before I started homeschooling.
Talk about hitting it right on the dot.
This is my third year going to Nor'wester, and it's the only summer camp I've gone to more than once in my lifetime, so my return for a second and third round shows how good of a program it is. Unfortunately, I've gotten old enough to the point where this is the last year I can go as a camper which is really disappointing, so I'll be sure to make the most out of it. Similar to the situation with Running Start, it'll be much easier to write about my experience once I actually go, so there will probably be more to come later on.

I'm honestly surprised that I found time to write this post since I've pretty much been packing for camp all day long, but I'm glad I managed to get this out in time. I leave early tomorrow morning, and the 21st of August is when I will be saying my last farewells to Nor'wester.