I ran into this the other day while browsing through some old photos of mine. I have no idea how I got it and I had no idea it was there, but it was there and I wanted to share this with you.
It turns out I wasn't wrong when I said I had been playing Marble Blast for almost a decade, and I have 10 more days to go before the 10 year mark comes around.
Back on topic. Here you see a game we can all recognize (Marble Blast Ultra), a can of Diet Coke and a bag of Harvest Cheddar Sun Chips on either side of this computer, what seems to be a pencil sharpener on another table, and a 5 year old child. Yes, that child is me. This photo was taken on December 10th in 2006, so just about a month after I had turned 5, which is the same year (though close enough to say almost a year after) Marble Blast Ultra was released for the Xbox 360. I still have this same exact console and this same exact copy of Marble Blast Ultra (more specifically a copy of Xbox Live Arcade) in my basement to this day, and I'm thinking about playing it for a little bit after I write this post.
Fun fact for you all. Whenever I played this, 10% of the time was me playing on my Xbox Live account (GemCollector01 - also have the account to this day), and 90% of the time was me playing on my mother's Xbox Live account. Why was that? Because somehow I had figured out how to change the marble, but only that one time. I never remembered how to change it again (and I never asked for help), and I didn't like the good ol' blue marble skin.
And no, I don't look 5 years old anymore. 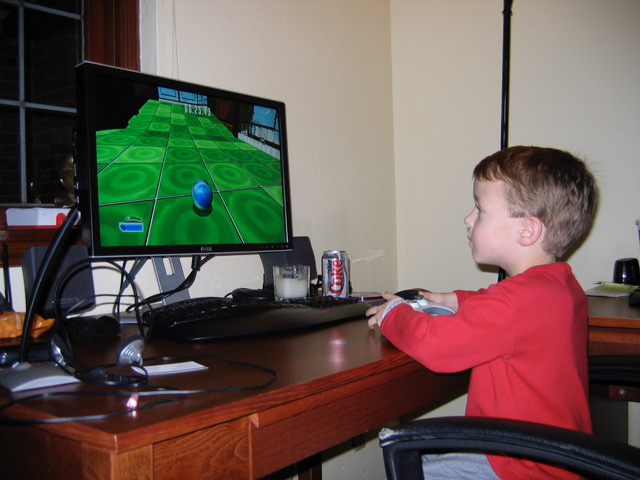 So hey, if my Xbox Live account still works and any of you still have a copy of Marble Blast Ultra, I'd love to play with you! I'm not nearly as good as I am on a computer, but I have a few tricks up my sleeve (not the read ones in the picture).
See you later.
First player ever to get all of the Awesome Times.
Last edit: 28 Sep 2018 16:06 by Nockess.
The following user(s) said Thank You: Nature Freak, Weather, CylinderKnot

Less More
30 Nov 2016 21:23 #2 by Nature Freak
Replied by Nature Freak on topic Memories
Awwwww, how cute! I myself never played Marble Blast that young... I was introduced to it at six but didn't play again until the age of ten I think. Pictures like that really are wonderful memories to have!
The following user(s) said Thank You: Nockess