Less More
11 Jun 2016 19:25 - 11 Jun 2016 19:39 #1 by hPerks
June 11, 2016 - Makin' it big was created by hPerks
As long-time fans of this 2-week-old blog may know, I've been busking periodically for the past year or so, usually setting up my little 61-key electric piano down by the waterfront. It's not a bad gig at all, but there are a couple downsides - I'm not always guaranteed a spot, turnout is kind of hit-or-miss, and (perhaps most importantly) it's weather-dependent. Also, I don't have to pay anything for it.

Fortunately, none of that will be an issue at the new gig that I just got, busking at our local farmer's market! The auditions were held yesterday, and mine went very successfully. Auditions were 15 minutes long, so I basically just improvised on two well-known jazz standards (Dave Brubeck's Take Five and Miles Davis' Nardis) for about five minutes each.

Now I just have to pay the flat fee and wait for 'em to work out my schedule. Look out for me on the road if you're ever in <the city where I live>!

In the meantime, I've also been making progress with my web games, including the long-anticipated (okay maybe not) solitaire version of Masterword ! 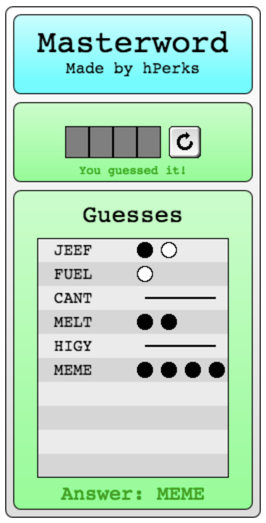 (As you can see, I took some liberties with the allowable guesses dictionary.)

If you've been living under a rock for the past month, or (heaven forbid) actually doing things in real life instead of hanging out on the forums 24/7, Masterword is a code-breaking word game based on the popular game Mastermind , which started out as a forum game here . The strategy in singleplayer is a bit different from multiplayer, but it's still as fun and interesting as ever -- go check it out!

(Here, nobdoy, I'll save you the trouble.


hPerks'); FLIP TABLE (╯°□°）╯︵ ┻┻-Today at 2:03 PM
dood i have analytics on my website
now i know where all yall live

The website overall is beginning to polish up, and I'll be continuing to post links to my old stuff on there. Unfortunately the Game Maker stuff is only in .exe format, which is not usually the safest format to download things in, but if y'all trust me (and your malware detector) enough, I might think about putting it up. Regardless, I may put up some screenshots/footage of those old games, and perhaps even remake them in another language (most likely Javascript - sorry Jeef).

My next priority though will probably be either adding more features to Masterword (stats and stuff), or uploading some more recent programming projects I've done. Until then, stay tuned!

(Also, about my previous entry, apologies if anyone took it the wrong way. A few people thought it sounded kind of conceited - as in, "I'm so great that I find it hard to be humble". And I can understand that - as I said, I'm not good at picking up on that stuff, because I don't react negatively to arrogance in the same way that many others do. It may be that it's just very hard in general to talk about that kind of thing without putting people off, but it's something I've really struggled with for a long time. But I'd like to clarify: the point of that post was not at all to brag or to complain - I refrained from mentioning myself at all whenever possible. It was basically just something I was thinking about that I thought might be worth sharing. Also, it had been a slow couple days for me and I needed something to post.)
"it's funny how the super monkey ball game without monkeys is the one that attracts more furries" - eblu 2018