Less More
21 Jul 2014 15:08 - 29 Nov 2014 14:54 #1 by Kwill
Kwill's Levels was created by Kwill
Hello everyone, is this thread I will be sharing my singleplayer and multiplayer custom levels: hope you enjoy and feedback is appreciated. 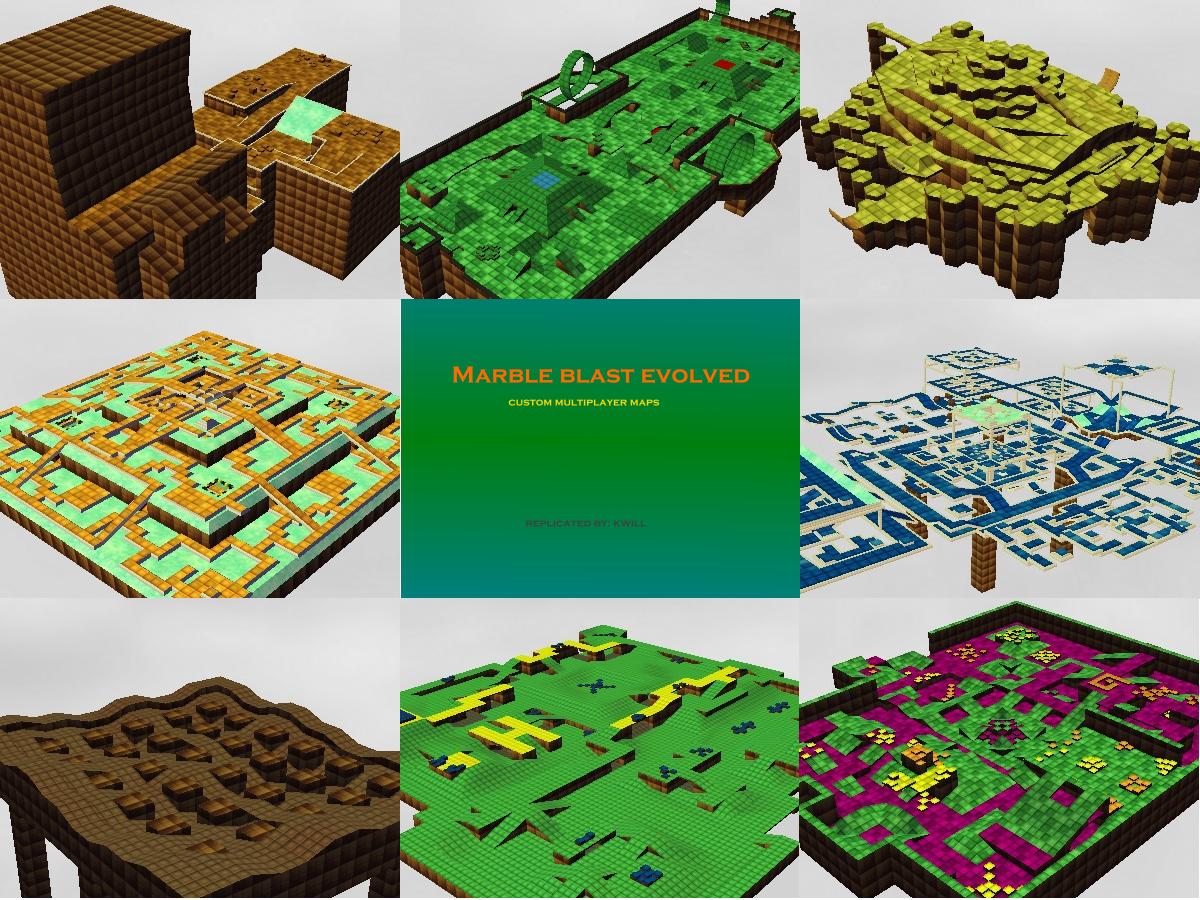 Simon Says:
A unique level with custom textures that tests the player's ability to follow directions.

Tmbertown:
A large complicated pathfinding level with wood textures and varied challenges. It's actually based on a playground I used to go to a lot as a kid. Even though Simon Says was my first released level, this was my first foray into Constructor building. This thing was hard to convert.

I no longer have either level on my computer so I can't provide pictures or download links, but they will be in CLA when that comes around.

Tmbertown:
This is a version of the single player level slightly modified for multiplayer. The jump amount has been increased specifically for this level to allow for doing slope hits on the fences. Again, I don't have a picture because my hard drive crashed, but this level will most likely be featured in RC1 as a custom level.

Tilo:
This level was originally built by CyberFox for the game Marble Blast Advance, so he gets full credit for the interior. I saw the level's potential for multiplayer so I studied the level carefully and replicated it for MBP to the best of my ability; hope I did a good job. The level includes many slopes, ramps, platforms and all the classic challenges with an emphasis on powerup usage to transverse quickly around the huge map. The floor textures are half-sized because normal sized textures would be cut in half at the edges. This level will is probably in RC 1 as a custom an official level as well.

Landscape:
A new level I designed on paper over some boring classes. This level has several different sections, each dedicated to a different friction (there's not many friction levels, so why not!). Each friction has a different challenge, leading this level to be quite diverse in terms. Gameplay moves very quickly in this level. Once again, it's a ppowerup based level, so you'll find lots of them in the map. This one MIGHT be in RC1. Matan didn't really like it

but we'll have to see about the rest of the Platinum team.

Less More
21 Jul 2014 19:16 #2 by MBKid
Replied by MBKid on topic Kwill's Levels
Wow, these levels are amazing! In my opinion Landscape seems awesome, I like how you included so many frictions. I would like to see it in RC1

Less More
21 Jul 2014 19:30 #3 by Jeff
Replied by Jeff on topic Kwill's Levels
Awesome job there Kwill and hoping to see many more from you!
I am a programmer. Most here know me for being one of the major contributors to Marble Blast Platinum and PlatinumQuest.

Less More
22 Jul 2014 02:14 #4 by Kwill
Replied by Kwill on topic Kwill's Levels
Thanks. BTW, in landscape, inside the building you seen on the far left, there is a frictionless surface section, so have that to look forward to! 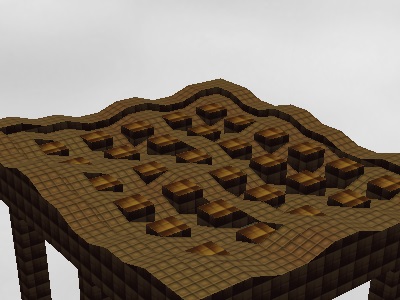 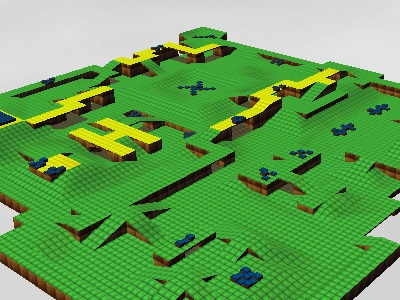 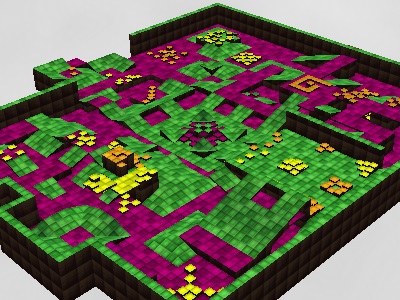 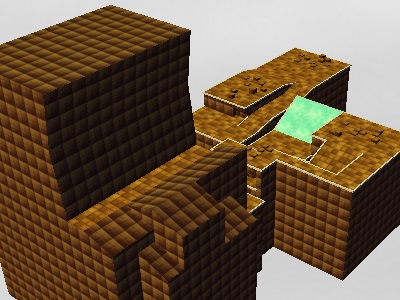 After a couple weeks of almost constant work (Constructor is addicting, lemme tell ya), I have gone ahead and built replications of the eight best custom multiplayer maps from the PC port of Marble Blast Ultra. I didn't use any type of MBU-->MBG converter; I looked at the MBU interior and rebuilt it in Constructor brush-by-brush from the ground up. Before I show pictures however, I want to offer a disclaimer.

I realize that this project may be controversial in some ways, so I'll provide my side to arguments before they come up. The MBG and MBU communities don't really get along a lot of the time, but I see no reason why we shouldn't have anything to do with MBU. Regardless what the creators of MBU Evolved have done in the past (and I don't even know what they did), the multiplayer maps in that game are artwork and art should be enjoyed no matter who the creator is. The eight levels I replicated are fantastic, and it's about time they got a chance in the spotlight. If the original builders of these maps ever come across this post and think I'm stealing their maps, that is not my intention at all. I take ZERO credit for the designs of any map. My purpose for taking on this project is simply so these maps can be recognized and played on. It was sad watching maps with so much work put into them go to waste in MBU PC, and because I liked them, I revived them. So I hope this puts to rest any controversy that might arise from this.

I tried my hardest to keep my replications as close to the originals as possible. I changed the colors of the textures of a few maps, a few names, and in a couple, I added an extra gem spawn or two in areas that I felt should have some, and I changed a few qualify times and spawn sizes to more realistic levels but aside from that, I made very few changes. On the flip side though, many of the original maps had secret areas. I did not build these for two reasons; 1) I'm not sure I can build all of them, and 2) those secret areas give a little extra something to the original levels. Those secret areas are too special to be replicated, and it feels wrong to do so. Aside from that, I'd say these levels are at least 97% accurate. It took some blood and sweat, especially when it came to adding gems and fixing errors that came up.

On to the maps, in reverse order from the order I built them in! (I went from hardest to easiest).

This is a small simple map, but it has a unique and innovative concept. Gems don't come in spawns; they come only one at a time, and players have to rush to get there first. Matches here can be really hectic, and it's great fun superspeeding over the slopes and just beating out your opponent to a gem.

It's a sequel to Sprawl, yeah, but it's substantially different enough for me to include it. Sprawl Evolved is more open than Sprawl, so there's more focus on Super Speeds rather than Super Jumps. The level has a cool feeling because it's based off a classic level, but it provides new challenges.

(The original is called Sprawl Box Royale, but Treasure Box sounded better lol). You can get a LOT of points on this map, so expect some high-scoring matches here. Plus, it looks awesome and is fun as heck. Powerups make this even better.

An odd little level I found recently with great scenery and a unique feel to it. The original was called "Blue Hill Zone" because it was blue lol, but I thought the brown brought out the scenery more. Fun to go exploring the tunnels and mountain.

This map is different from the other maps. Unlike the other seven, Cragmire isn't actually in MBU yet. I built this entire thing from looking at the YouTube video (or making an educated guess when there's a part I couldn't see). Normally, I wouldn't go to too much trouble, but this map is so badass, I couldn't resist. (also, it's clearly built for King of the Hill.)

This map was tons of fun to build, and even more fun to play. Players can have stunt contests and just goof off. The original level only had red gems, but I added a few isolated blues to spice things up a bit. This map was the reason I took on this project because it just looks incredible, and credit to Pocket for the artistic areas in the original I couldn't include here.

This map was a bitch to build. The sloped trim was hard and the whole thing added up to 2016 brushes; add that to the fact this map has 1000 gems in it, and we get quite a cumbersome situation. I put a lot of work into it, but I'm really proud of how it came out and I can't wait to play people on it.

Possibly the most gorgeous map out there ever. This was so much fun to build, and although it was quite a process, I couldn't stop thinking about the creativity and dedication that was put into it originally. This map tests your marble the whole way through.

Same.
YOU BETTER ADD THESE TO THE DEDICATED SERVER PLATINUM TEAM
"it's the internet eguy. where children are men. men are monkeys, and women are PQ."
-Jeff 2014
Last edit: 26 Nov 2014 20:05 by Eguy. Reason: serverbecuznewppldontknowwhatdedicatedisifidontsayserver

Less More
29 Nov 2014 14:54 #11 by Kwill
Replied by Kwill on topic Kwill's Levels
The link is fixed now, sorry about the map errors some of you were reporting.