To all the people wanting to get into speedrunning in vanilla MBG who have lost recs to the rec system and/or poor explanations of it, or do not know what a rec is and want to know (please keep your innocence) - this guide is for you. This post will try to cover every detail you need to know about recs and how they work so that you hopefully do not lose a good run, or, god forbid, a world record to the mess that the rec system is. All of this will seem pretty complicated at first, but don’t worry. Once you play around with recs a good number of times it is actually not as daunting or confusing as it may seem.

Some things to keep in mind: Red text indicates what is either a common mistake and/or things you shouldn’t do, and blue text indicates alternatives to something I mentioned earlier.

What are demos/recs?
This section can be skipped for those already familiar. For the uninitiated; demos, or recs, are files that MBG uses for its replay system. The rec works by tracking all inputs for each frame of the run, which are recreated in real time when the rec is replayed. This usually works well, but there are certain factors that could easily cause recs to not work as intended. These factors will be discussed later.

Before using recs (on Windows)…
Before starting to record a rec, it's important to note that how you open MBG (with or without administrator) and where the shortcut is on your computer can affect whether a file is created or not when recording. A rec not saving due to this has happened to a select few people in the past and has caused some confusion. For starters, avoid multiple installs of MBG on your computer to prevent confusion on where a rec got saved (this applies to both Mac and Windows).

If you're opening the game from within the MBG folder (located at C:\Program Files (x86)\Marble Blast Gold by default) and you save a rec, then it will save the rec properly. This works with marbleblast-patched.exe as well. Otherwise, if you have an MBG shortcut outside the root folder and you're using that to open MBG, run it as administrator, so that recs save properly.

What I personally do: 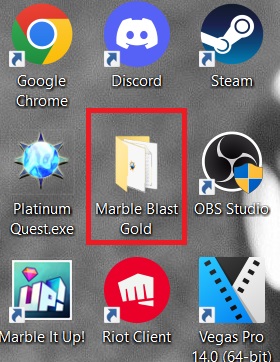 What I found to be most convenient for me was to drag the MBG folder out of Program Files (x86) after a fresh install, put it on my desktop, and run MBG from there. I wanted to have MBG in an accessible location for me along with everything else relevant to it (like recs). Another option is to create a shortcut for the Marble Blast Gold folder to your desktop. By working directly with the Marble Blast Gold folder, you will never have an issue where a rec doesn’t save even though you followed all the steps for recording a rec file. This is merely a suggestion, though, so do what works for you.

Recording and Viewing demo/rec Files:
The reason why you are here. In this section, I’ll go over all the important details you have to follow when dealing with recs, along with some extra details that may be beneficial in some scenarios. Here is a video showing all the important steps below in action. This video works best when viewed in tandem with the written steps below.

In addition, Dom has also created some great resources that makes dealing with recs a lot more convenient. If you are playing on a Mac however, the relevant tools will not work for you. You can find them here. The ‘Read Me’ document contains all the details about every tool provided so don’t skip over it. Here are all the relevant stuff that pertains to recs and which steps they apply to: If you are a smelly boomer and want to do it the old fashioned way, don’t worry, the relevant steps below have you covered:


Desyncs
Even if you follow all of the steps above to a tea, there are a few scenarios where the rec will display an incorrect time at the finish, or not even finish at all. This is called a desync, and on a select few levels can be incredibly annoying. Here is what they look like, along with the solutions to them (more info below).

Step 7d in the section above is the only example where a desync can happen for any level, but thankfully this is a minor issue. What are not so minor are trapdoors and fans. These two hazards are major issues to deal with when getting recs to play back properly.

Trapdoors and fans will desync whenever the frame rate at the time of recording does not match the frame rate during playback. Fortunately, trapdoors will cause a desync only when stood on for too long. To avoid this, either continuously jump or be rolling fast enough on the trapdoor to prevent being on the trapdoor while it is descending.

For fans, the solution is to use a third party frame rate locker like RTSS to lock to a frame rate where every frame is the same duration (250 fps, 200 fps, 125 fps, 100 fps, 50 fps). You will want to use whatever the highest value is that you can maintain with 100% consistency. When playing back the rec, you will also need to lock to this value. Unfortunately this is a Windows only solution, as there are no framerate lockers like RTSS for Mac. The closest thing Macs have is playing MBG with Vsync and playing the rec back with it (more info in the next section), but this is very unreliable and is not recommended.

Rivatuner Statistics Server (RTSS) and Vsync
Mentioned in the previous section, RTSS is a framerate locker for Windows that allows you to lock your framerate at any value from 30 (minimum fps allowed for marble blast runs) to 480 (maximum for RTSS). You will rarely use this when doing runs, but it helps immensely on Airwalk and Fan Lift for more consistent rec playbacks, and for Freeway Crossing and Space Slide for more powerful mine hits. If you’re interested in using it for these levels (and possibly others), here is the download link, download the latest version at the bottom of the page.

Once you download RTSS and launch it, it won’t open right away. It’ll appear on the far right of your taskbar as a tiny icon. Click that icon for RTSS to open. 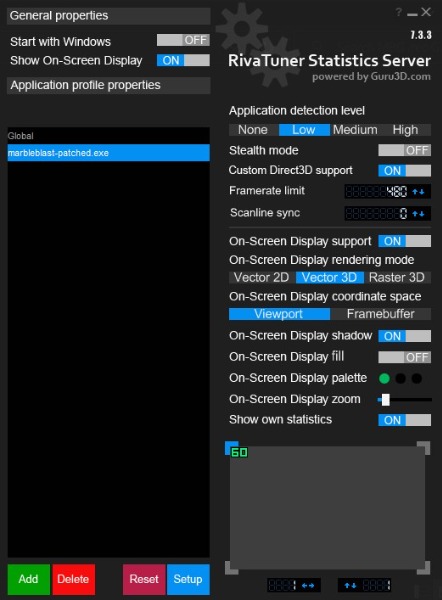 You should be met with this screen. If you want only a specific game to be affected by RTSS, click on the green “Add” button, navigate to wherever “marbleblast-patched.exe” is (unlocked fps version) and select that. Copy all of the settings from the right hand side of the screenshot onto your copy of RTSS, you can adjust a few of these settings to your liking.

Now with RTSS configured, open up MBG and you should see your framerate in whatever corner you put the fps counter in. Now you can play any level you want and record recs as normal. Note that when viewing a rec that was originally played in lower fps, it will look more choppy than other recs when viewing it at a higher framerate.

While Macs may lose out on locking to any fps value they want, they can lock to whatever their monitor’s refresh rate is (or whatever they have their refresh rate set to). To do this, open MBG and type in the console setVerticalSync(true); to set your fps to your refresh rate, then play as normal. If you want to turn it off, replace true with false. This command works on both Mac and Windows, but the downside of this method is that your fps won’t be as stable compared to when you are using a framerate locker.