× New Spam Board rule: NO USELESS SPAM! THIS INCLUDES POSTS THAT JUST CONSIST OF "AKJFWJF;KLDSNFLKDSJFLK" OR A LIST OF SMILEYS! The Spam Board is meant to be the place for threads that are just playful, not for plain stupid, immature posts!

Up to 10% warning is given for creating too many topics.

Up to 10% warning is given for posting useless, immature spam. 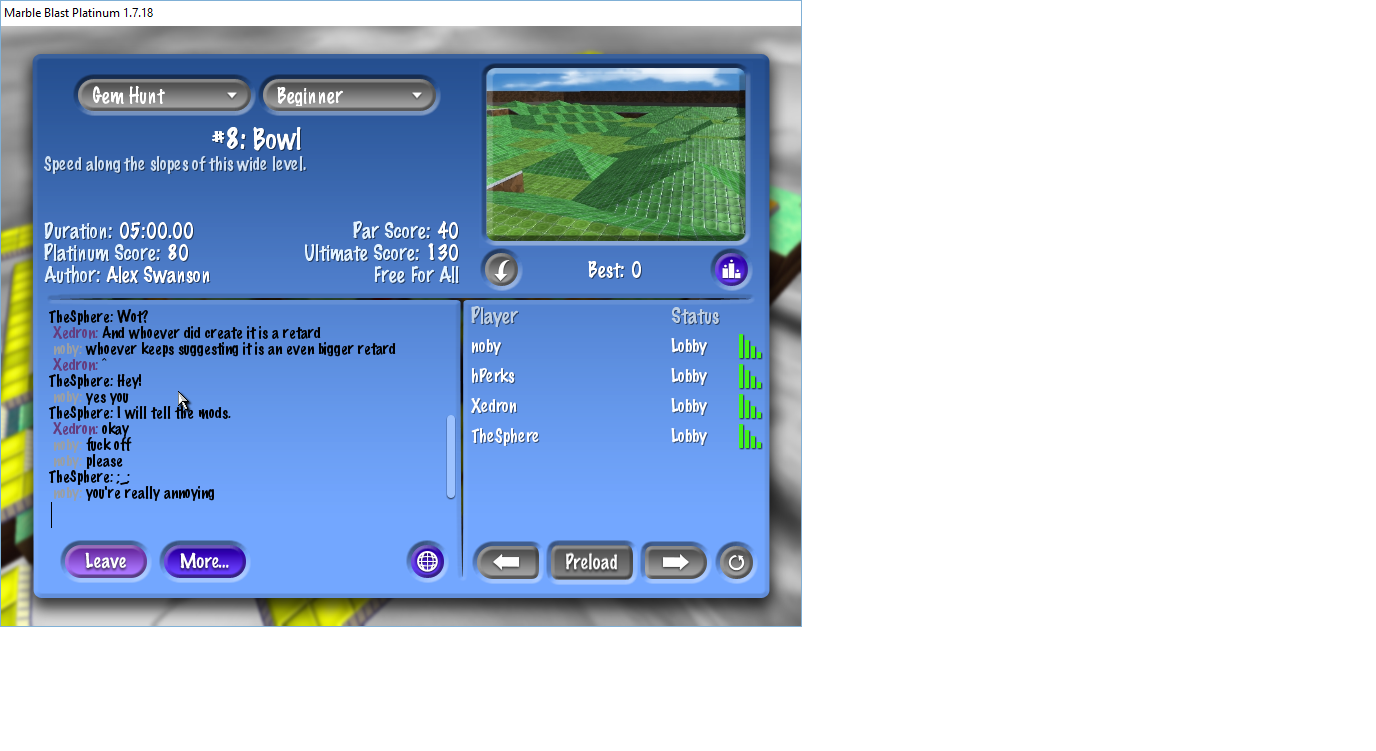 The object of destroying walls is pretty much to just get ch*rploads of bricks and buy loads of everything, while learning for destroying walls in the process. Its time to rise to greatness!
The topic has been locked.
Less More
22 Aug 2016 17:55 #2 by HiGuy
Replied by HiGuy on topic Pls ban them.
Had this been on a dedicated server, I would have had possibly a little bit of say in the regard, but seeing as how you repeatedly joined their server and bothered them, holding up their games and yelling about playing specific levels, I can't really side with you on this case. You need to realize that they can do whatever they want on their own server, and your nagging led them to become annoyed and respond that. I'm not going to take any action for something that people did on a server that they hosted and you kept joining by choice.
PQ in a nutshell
The following user(s) said Thank You: snowbody, Lee, [email protected], Three, Ralph, Enigma, Marson, Derpking, Tue27, MBOUltimate, hPerks, Xedron
The topic has been locked.
Less More
22 Aug 2016 19:10 - 24 Aug 2016 07:20 #3 by Isoplere(Jiquor)
Replied by Isoplere(Jiquor) on topic Pls ban them.

HiGuy wrote:
but seeing as how you repeatedly joined their server and bothered them, holding up their games and yelling about playing specific levels, I can't really side with you on this case. You need to realize that they can do whatever they want on their own server, and your nagging led them to become annoyed and respond that.

Also, the reason why I did an Imgur link for the meme is because it somehow glitched/wouldn't upload to this thread.
So I used Imgur instead for it, rip me.
Isoplere - Marble Blast Modder; getting better day by day, update by update.
Last edit: 24 Aug 2016 07:20 by Isoplere(Jiquor). Reason: -7 Karma to OP
The following user(s) said Thank You: snowbody, Xedron
The topic has been locked.
Less More
22 Aug 2016 21:42 #4 by snowbody
Replied by snowbody on topic Pls ban them.

TheSphere is leaving out the part where he kept rejoining my server and spamming stupid messages like this ^^ for over an hour, as well as intentionally holding up games by not pressing the ready button
The following user(s) said Thank You: Xedron
The topic has been locked.
Less More
23 Aug 2016 03:08 - 23 Aug 2016 03:10 #5 by Blasted
Replied by Blasted on topic Pls ban them.
You should've banned him when he annoyed you the first time. Kick him out the next time he does something like that. I did something like that once and changed my ways afterward. Also, you shouldn't swear at him. Instead just politely tell him to stop.

Also, why are icy tightropes still a thing? I rejected those recently.
My Twitch: www.twitch.tv/blastedmarble
My Twitter: twitter.com/BlastedMarble
Last edit: 23 Aug 2016 03:10 by Blasted. Reason: Swearing is not a virtue.
The topic has been locked.
Less More
23 Aug 2016 14:17 #6 by IsraeliRD
Replied by IsraeliRD on topic Pls ban them.
Because Icy Tightrope Fold Maze is still a thing
"matan, now i get what you meant a few years back when you said that "the level in mbg is beyond me" after the last rampage i noticed things were insane, and now i truly feel that too" - Dushine, 2015.
The following user(s) said Thank You: Isoplere(Jiquor), Frostfire
The topic has been locked.
Less More
23 Aug 2016 21:18 #7 by NF
Replied by NF on topic Pls ban them.
The Sphere has joined my server a few times while I was practicing solo multiplayer and I had the sound turned off and he was spectating my practicing and I didn't even notice that he spammed taunts incessantly for half an hour until I saw the server chat just before quitting the server. If you haven't the heart to ban him (which I know Nobody does, but other people may not) just kick him and turn off your sound if you must.
The following user(s) said Thank You: Frostfire
The topic has been locked.
Less More
23 Aug 2016 21:43 #8 by Xedron
Replied by Xedron on topic Pls ban them.
Yes, please continue to completely not mention the part where you spammed random taunts, spammed "Play Ice Tightrope Battlecube Finale!", holding games up, and completely staying on the server for no reason whatsoever besides this. Nobody overreacted, but tell me you wouldn't do the same if someone deliberately spammed taunts during your game, and wouldn't leave the server no matter what.

Even after this, I tried to reason with him a bit with some remarks like "just don't act like this on our server" and just responded with more stupid taunts, spam and "comebacks". He's been constantly doing this and I don't see how this is our fault for trying to reason with him.
"cna you salt spalt the slevel salt of 6 year salt who ca salt the lsat" - nobody, 2017
The following user(s) said Thank You: snowbody
The topic has been locked.
Less More
24 Aug 2016 08:34 #9 by Ralph
Replied by Ralph on topic Pls ban them.
Not here to do the hater, but Sphere, you had it coming.

Imagine that you and another player want to play a 1v1 match, but Powerjohn (bad example, I know) keeps joining the server and spamming dumb taunts and cussing at people. You would react the same way as Noby, right.You would tell him to quit the server, he'd decline, and, losing your nerves, you'd start swearing at him, and so on.
In that case, you started causing trouble and you deserved to be banned at this time.
Don't try to hide behind the moderators, they don't give an oil slick about you and they don't want to help you, since you're the troublemaker.
That will teach you not to do to others what you wouldn't want done to yourself.
Oh, and one last thing. Asking for the moderators to ban them is a huge disgrace from you. You sholud be ashamed of your behavior.
You forget a thousand things everyday. Make sure Marble Blast isn't one of 'em.

Ralph's Improved PQ Sound Pack : marbleblast.com/index.php/forum/mbdk-sounds/9663-ralph-s-improved-pq-sound-pack-now-out-for-download#142246
The following user(s) said Thank You: snowbody, [email protected], hPerks
The topic has been locked.
Less More
24 Aug 2016 16:26 #10 by HiGuy
Replied by HiGuy on topic Pls ban them.
Alright I think this topic has served it's purpose too. Locked as well.
PQ in a nutshell
The topic has been locked.
Moderators: Doomblah, Go'way
Powered by Kunena Forum