So in the past few months I feel like I've been the is-Matthieu-okay-with-releasing-Marble-Blast-Super-yet-can-you-ask-him-when-he-gets-online-mesenger-guy and I'm glad to say that yes, Matthieu Parizeau and David Luo have finally officially confirmed that it is okay to give out a Marble Blast Super incomplete release. This is the latest version that will ever be made, and the resources used to make it such as the map files have been left in because Matthieu told me to leave them in. This is not a leak, this is not me giving out the code without permission. It is finally, absolutely 100% confirmed and Marble Blast Super is 100% more dead. Hallelujah.

So anyway, here is a link to the installer. Many of you may have a previous version of MBS already, but this is the final version that will be made, BETA 0.50 to be more specific.
Note: Matthieu told me to report a bug which he couldn't figure out how to fix. Sometimes pressing the Next Level button when a level is completed will crash the game. Of course, now that the mod is not being maintained anymore there's not a whole lot of point in fixing this.

I couldn't find rules regarding forum posts for mod releases, so I hope MEGA will cut it, since I don't have a paid account on MediaFire.
mega.nz/#!ZhgRmTxb!FhYDqw-0obkPg89kngHzpiN5-A1Bd16HVt__EQHA_pA
www.4shared.com/zip/8W87-9Egce/MarbleBlastSuper-Beta_50_setup.html
ulozto.net/xxdmWxpB/marbleblastsuper-beta-5-0-setup-zip
Last edit: 19 Dec 2015 03:56 by tomysshadow. Reason: Added more mirror links
The following user(s) said Thank You: davidjl123, Nockess, artur15141, Arcadeog

Less More
21 May 2016 02:09 - 23 May 2016 02:14 #3 by Nockess
Replied by Nockess on topic [Official] Marble Blast Super - The ACTUAL Incomplete Release
Just confirmed with Anthony (tomysshadow) that I should release the latest Dev version because I still have it. There's not much in terms of changes or additions, but there's a few more levels and just other stuff in general.
Download the latest Dev version here.

As for if MBS is dead or not.
I know, you all have heard it's basically dead. You know what? That's basically true. However as I've sent BlastedMarble a copy before releasing it here (only like this morning, like 11 hours ago) and that he's played it for a little bit, he did make this series of comments on webchat. 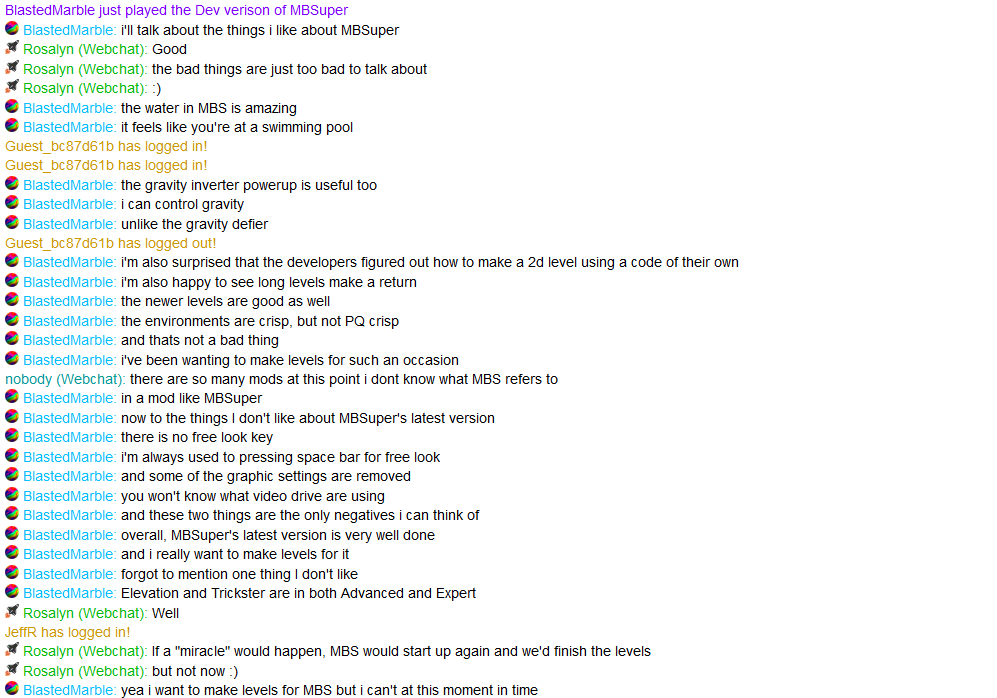 Also, I'm pretty sure you can't choose your video drive is because you can only use OpenGL Direct3D.

A lot of the former MBS team members' level building skills have gotten much better since the death of MBS, and there's a chance we can recruit some new people. As far as coding goes, I don't think we're gonna get another Matt P. anytime soon if he continues to be at a college with no internet.
My point is Marble Blast Super might not be 100% dead. It sounds crazy, but there's a small chance. If the MBS team makes better decisions and we start using our heads, Marble Blast Super could turn into a decently good mod.
I hope for this actually. I enjoyed working on MBS (aside from all the stress). It might happen...

Less More
21 May 2016 05:45 #4 by Blasted
Replied by Blasted on topic [Official] Marble Blast Super - The ACTUAL Incomplete Release
By the way, since Water Master Course has ice in it now, I'll have to call it "Ice Master Course" and change the names of each challenge.
My Twitch: www.twitch.tv/blastedmarble
My Twitter: twitter.com/BlastedMarble

Less More
21 May 2016 14:59 #5 by Nockess
Replied by Nockess on topic [Official] Marble Blast Super - The ACTUAL Incomplete Release
Changed the zip file a lot so you don't have to download 650MB and now it's down to 188MB (If I remember correctly). See the other post for the link.
Call me Chris!

I'm just an ordinary marble blaster who like to create new and unusual things.

Creator of the Marble Blast GLC series
Check out and download my custom levels here .
Check out my original musics in this thread and in my soundcloud here .
Last edit: 24 May 2016 00:49 by NaCl586.