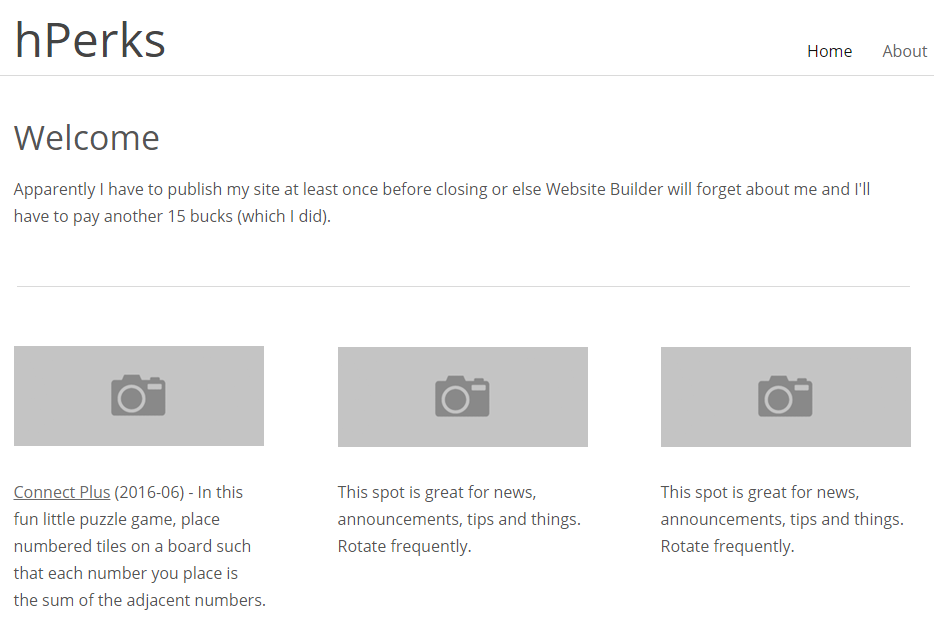 Well, not quite yet, but it's in the making as you can see.

I thought it would be a good place to post some of my programming stuff, music, and other things that the community might be interested in. I was (still am) kinda conflicted about hosting it under the name "hPerks", rather than my real name, partly because if I ever wanted to show it to my friends IRL, then I would give away my online name to them. But I decided that was probably not a big deal (a couple of them know it already), compared to giving away my real name to people online.

So there you go. I'll work on the website more in the days to come, and hopefully there will be stuff on there that everyone can enjoy.

Right now it's kinda just been a place for me to host a fun little solitaire game I've been working on for the past couple days, called Connect Plus :

The rules are very simple: place each numbered tile from the queue onto the board so that it is the sum of the numbers adjacent to it (orthogonally or diagonally). As you place tiles, you build up bigger and bigger structures and unlock tiles with higher numbers. There's a lot of strategy, planning and spatial reasoning (whatever that is anyway ¯\_(ツ)_/¯) involved.

As the fellas on Discord will already know, the game has been up for public testing for about two days now, and I've been really pleased with the enthusiastic response that it's gotten. Shoutouts to all the people who tried it out, including (in no particular order) Aaron Youch (okay so it's alphabetical order), Jackrb, Kurt, Nature Freak, nobody, Polarium, Robert, and more people that I'm probably forgetting (Derpking? Lee? Regi?). I've seen some impressive scores, including a 160 from Nature Freak, 257 from Robert, 337 from Youch, and an amazing 722 from Kurt -- who not only beat my high score of 551, but managed to break the game in the process by making the board so big that the queue on the bottom was no longer visible: 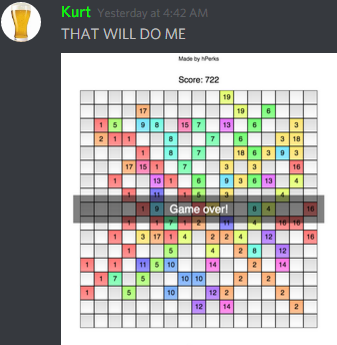 (Blame the GoDaddy Website Builder, and its inability to edit HTML directly. I've since fixed it so that the board zooms out when it gets bigger than 15x15.)

The game is made directly in Javascript, and it uses a cool little "library" I made over a year ago and recently rediscovered called James (short for Javascript games). It's similar to Game Maker in its event-driven approach, but with more object orientation, including a "template" system which somewhat mimics "classes" in other, more conventional object-oriented languages. Still really in developmental stages right now, and I'm basically changing it every so often as I use it, but dangit it works, and it's just so delightfully simple for making little web games quickly and easily.

Next thing I hope to put up there is a solitaire version of my game Masterword, with maybe a highscore thing for how many words you can guess within a certain number of total guesses. As for this game, I might work on some additional features -- like an online leaderboard, and possibly outlines around the squares where you can place your next tile (I don't want the game to be too math-heavy).

A couple people have also recommended I make a mobile version, which (spoilers!) I actually have had a prototype of for quite some time - the challenges with that have been with the small screen vs. large board size, and (of course) lag. I'll maybe work on polishing that up as well (probably not for a while).

But overall, a productive few days for me on the programming front. Nothing much happening on the musical side -- I did record yet another 20 minutes of me fiddling around on the piano that I'll have to sort through later, but there's some good stuff in it. That'll probably be on hold for the next little while as I continue to build up my coding resume.

So go try out the game if you haven't already, and stay tuned for more updates! hPerks out

P.S. Also, thanks to a recent raid by the Discord Army™, we now have a NEW most-thanked post on the forums, with 23 thank-yous!

I'd like to thank all the little people.
"it's funny how the super monkey ball game without monkeys is the one that attracts more furries" - eblu 2018

However, as the local paranoid ****head, I feel the need to paste this quote (knowing people won't care; it only shows cities anyway and can't link them to users) :

hPerks'); FLIP TABLE (╯°□°）╯︵ ┻┻-Today at 2:03 PM
dood i have analytics on my website
now i know where all yall live

nobody wrote:
However, as the local paranoid ****head, I feel the need to paste this quote

(whistles softly to self)
PQ in a nutshell
The following user(s) said Thank You: snowbody, [email protected]


Anyways, let's compare this with my game:

(Unlike Javascript, I made this in Idle Game Maker.

Now you have a competitor!

Well, your game has more lines than me. (Mine has 445, and yours has 624...)
The object of destroying walls is pretty much to just get ch*rploads of bricks and buy loads of everything, while learning for destroying walls in the process. Its time to rise to greatness!
Last edit: 09 Jun 2016 03:26 by TheSphere.