June 8, 2016 - Some thoughts about humility and arrogance

For the past week or so I've been going through the fascinating blog posts of Dilbert creator Scott Adams, who has gained notoriety during this election cycle after having predicted a landslide general election victory for Donald Trump way back in September 2015. A trained hypnotist, Adams describes Trump as a "Master Persuader", and outlines the various psychological techniques Trump has used throughout his campaign to shift public opinion.

There's tons of interesting stuff on Adams' blog, both psychological, political and philosophical, and I think there are several areas on which we agree -- particularly philosophically, on the issues of free will and responsibility. I've never heard my own (albeit somewhat uninformed) stances on those kinds of issues articulated so persuasively -- not surprising, as persuasion is kind of this guy's thing.

However, one particular thing I noticed about Adams is that he's not afraid to brag about himself and his accomplishments. He consistently touts his skills in perception, as well as the accuracy of his predictions regarding the election cycle, and he does it in what I consider to be an "objective" way -- he gives himself credit where he feels is due, and doesn't hold back or project false modesty. In a sense, it seems like he praises himself in the same way he would praise anyone else. Not only that, he occasionally even complains (usually in a somewhat humorous way) about his lack of recognition among mainstream outlets as a pundit.

I say this knowing that it may give some people the impression of "oh, that sounds kind of annoying". And I get that. If you read his blog posts, you might go away with the same impression.

But here's another thing I noticed that somewhat surprised me: I didn't find it annoying at all. When he brings up his "perfect" prediction record -- even though I think there's quite a bit of revisionism going on when he talks about it, it still doesn't bug me. To me, this guy seems like someone who values being honest about his own self-perception -- slightly inflated as it might be -- over the impression that he might be giving off. And emotionally, I kind of admire that.

If people thought Adams held another person (say Trump) in unreasonably high esteem (and of course many people do), they might argue with him about it, and perhaps even throw around words like "deluded", but I can't imagine anyone would call it some sort of serious character flaw on the part of Adams. Holding yourself in unreasonably high esteem, however, is for some reason elevated to a higher level of disdain -- we call it "arrogance", "narcissism", etc. Conversely, if you have low self-esteem, it can sometimes be almost endearing (what I call the "One Direction effect" -- "you don't know you're beautiful, and that's what makes you beautiful").

If there's one thing that Scott Adams' blog has reminded me, it's that none of us behave very rationally, certainly when it comes to our feelings. I'm very afraid of heights, and I can't justify that any more than anyone else can justify their emotions. So I'm in no position to be condescending towards people who react negatively to arrogance. But again, I personally can't help but feel a little admiration for someone who's open and honest about their own impression of themselves.

From a rational standpoint, however, I think that honesty probably isn't a big part of morality, and if being overly humble (meaning humble to the point where you're unfairly self-critical) will annoy other people less, then generally speaking you should go ahead and humble it up. Tactful humility isn't my strong suit, but I'm working on it, and I hope to be able to pull it off convincingly some day.

But is humility a selfless gesture? I was reminded of this XKCD comic: 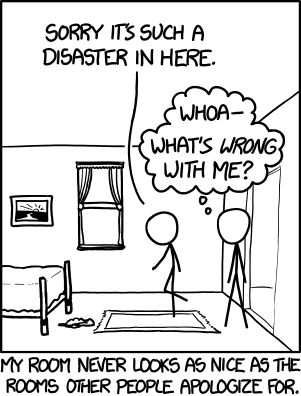 Obviously, the guy on the left isn't trying to make the other guy feel bad. But I think many of us (myself certainly) have probably been on the receiving end of something like this -- that's why the joke in the comic works. This person is insecure about their skill/talent in this particular area, and they're better at it than I am. What does that say about me?

And sometimes it makes me feel almost malicious when I exhibit the same kind of socially-mandated false humility. Why am I downplaying my skill/talent like this, when the person I'm talking to is worse than I am? What does that say to them?

Of course, it doesn't say anything to them, because (hopefully) they know exactly what I'm doing -- being humble. They know that they should take what we say with a grain of salt when it's about ourselves. And if we're both fully aware of this humility game that we're playing, then there's no dishonesty really going on. We should just keep playing, if only to avoid the risk of sounding arrogant. Because when that happens, we cross into emotionally sensitive territory, and that's never fun. Humility is selfless after all I think -- and perhaps especially so for me.

So yeah, this isn't an announcement that I'm suddenly gonna start constantly bragging about myself and being brutally honest about everything. I'll put on my little self-deprecation act again right after this post, don't you worry. But personally, I try not to care what your impression of yourself is, or how accurate it is, because you can't really control that. And on an emotional level, I'm attracted to honesty, all else being equal. So feel free to speak your mind around me.

That's all; hope you got through it okay.

Website is coming along slowly, and Masterword should be up soon! Mostly I've been wasting time hanging out on Discord and writing jojified lyrics to songs.

Oh, and this one's for Legenda:

P. S. Since I started writing this post, Scott Adams posted this to his blog. I take it all back, maybe he's just a prick.

A serious side note, though, it's really common that people could actually get mad for extensive bragging or some sort.

Here in my country (ask anyone on Discord of what country do I live.), there's something that is really related to this, and I am not happy about this being one of our traits, and I call that as smart-shaming. It really startles me. Smart-shaming is when during a casual conversation with ideas exchanging from one another (with interest from both parties, of course.); and then suddenly, the other party that received a factual idea recognize the said idea as some sort of an insult. Thus, they could say "Fine then, you're the smart one." or even to the point in which it is more harsh against the one who said the factual idea.

I don't seriously get of why people here limits the receipt of information, and mocking critical thought, as it is also vital to this country's education. I've seen one speaking and teaching his/her "audience" of how to speak English, and then one of the audience just replied : "Nosebleed!". The "nosebleed" statement is just unbearable to hear. The audience are just fools, considering that it is actually taught in schools. Or just in case, we have this in only one word : Anti-intellectualism.

To conclude, I think that one needs to encourage curiosity so that informative conversations will be improved. Try to ask questions and receive much information, so that the nation as a whole will be currently advancing, in intellectual capacity.
"tl;dr joj" - legenda 2016
The following user(s) said Thank You: Nature Freak

Less More
09 Jun 2016 16:36 #3 by [email protected]
Replied by [email protected] on topic June 8, 2016 - Some thoughts about humility and arrogance
I think a lot of the downplaying of talents/achievements comes from the fact that more intelligent people tend to downplay their own achievements, whereas less intelligent people tend to overplay their own achievements. This definitely applies to me, as whilst I've never perceived myself to be very intelligent/skilled and have tended to focus, to my own detriment, on what I am not skilled at (not helped by suffering from depression for around a year or two but I won't get into that).

Personally I have tended to be humble and downplay my achievements, as I never really have wanted to sound arrogant ever, but I have found that its good to take pride at what you are good at, but also to aspire to become better at what you are good at (and accept you can't be good at everything - which took me a while to come to terms with). Also found that, even when downplaying my skills in front of good friends, it usually, at least externally (i can't speak for what they actually think) brings out positivity and that has increased my own self-esteem, as naturally most crave to be validated by our circle of friends/family and use that to plant confidence in ourselves.

I agree that society tends to disapprove on those who hold themselves in "too" high self-esteem, but sometimes with good reason. Nonetheless having very little self-esteem is not good and no-one should aspire to have a low self-esteem, as I have suffered from it and it can become a crippling weakness if not dealt with. This post is kind of a mess of jumbled thoughts in a short post but I don't have time to reorder it as by writing this I'm procrastinating on other stuff I should be doing

Less More
15 Jun 2016 16:28 #4 by Evoker
Replied by Evoker on topic June 8, 2016 - Some thoughts about humility and arrogance
Thank you hPerks for posting! I really agree with some of (probably all of) the points you're making here, and especially like the little comic which went with a point you were making. I don't really have time to do a massive breakdown of everything I like and everything I want to comment on, but let's just say I like your post.

I think often people can take this kind of thing the wrong way, but really, humility is not always about lowering yourself socially or doing things that not everybody will want to do; it's also about recognising the truth about yourself and not being ashamed to say that you are good at something. This Scott Adams from what you've put here does sound a little arrogant, but he also sounds very smart and very 'self-mature' or 'self-accomplished'. It's nice to see a post like this because humility is one of the attributes I always want to have in life.
Read my blog here: https://marbleblast.com/index.php/forum/blog-ethan
My SoundCloud page is here: https://soundcloud.com/user-534133688