so i might make a mod here... but.... somebody explain to make a mod plz

Less More
17 Oct 2020 00:37 - 17 Oct 2020 00:42 #2 by Weather
Replied by Weather on topic so i might make a mod here... but.... somebody explain to make a mod plz
Making a mod of Marble Blast Gold is like making a game, except the game engine personally shoots you in the foot as infrequently as every few hours of development if you're lucky.
Here is a summary of the kinds of data to consider:
Code — The developer must understand basic programming concepts and know where to find available functions and such, as well as have a familiarity with the game and game engine structure. If you want to modify or add to the engine, uh, have fun with that.
Textures — This is not as straightforward as making whatever looks like it might fit into a Marble Blast game. A detailed texture does not fit with a cartoony texture.
Levels — The quality of the level may suffer depending on the workflow and the amount of time and effort invested. The player may suffer, too.
Interiors — Platforms. Interiors are an integral part of level making. Constructor is easy enough to learn, but it and map2dif (basically the two necessary tools) are buggy and it must be understood how to troubleshoot interiors. Making platforms in other modeling software can be done, but CSG modeling software like Constructor is designed for the familiar style and may be preferred despite the bugs.
Shapes — On top of standard 3D modeling, including unwrapping, texturing, rigging (yes, even in some Marble Blast cases), and animation, the problem of conversion to an uncommon format must be dealt with.
Audio — It's easy to make your mod sound bad. Also, who's going to do the music?
Interface — Hopefully not ugly or unhelpful.
All of these things take practice and thought to do well. Might want to make sure you have the whole thing planned out, too. There is plenty more work desirable to complete if the unique things the mod will bring to the table cannot be described, that is, if they don't exist. Licensing is also something to consider.
There is the question of more than one person developing the mod. No, wait, the real question is who in this small community wants to.

So there is too much to explain in a forum post. Many people have announced that they were making a mod before cancelling it.
I have never made a mod or a decently sized game, but I have contributed to mods and made levels, and some of those levels (mostly ones still in development) include new content in all of the aforementioned categories (well, usually excluding UI). It is very unlikely that I will make another level for a version of Marble Blast other than PlatinumQuest, because I have grown too comfortable with all the new features and refinements it offers. The parts of PQ that ought not to be messed with are a very small obstacle to making levels that appear to be straight out of a different mod.

I do not mean to discourage you, but rather I want you to know what you're getting into. If, despite that, you bring a mod to completion with new content in most of the categories, you will be celebrated (to the extent a small online community does) as one of the few dedicated people who did so. 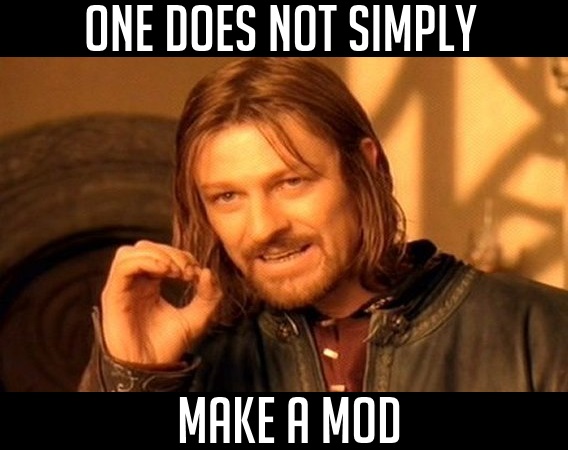